DUTIES AND RESPONSIBILITIES OF DEPUTY SHERIFFS 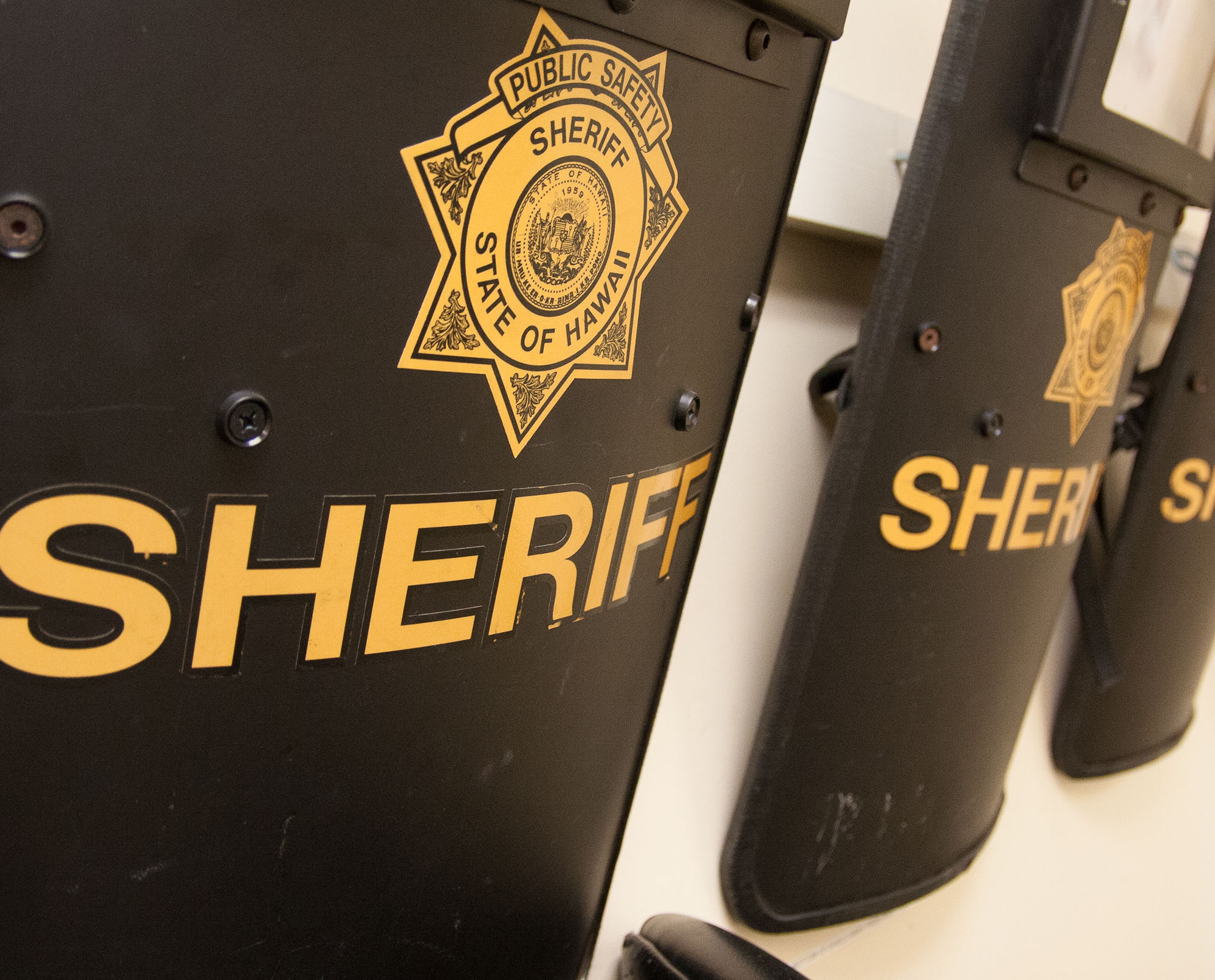 The work of deputy sheriffs in Hawaii is varied, depending on where they are located and the scope and nature of their position. Like the county police, they go through law enforcement training, carry a firearm and take an oath of office. They carry out law enforcement services statewide whereas the jurisdiction for police is counties. Here’s just a snapshot of the sheriffs’ duties and responsibilities: 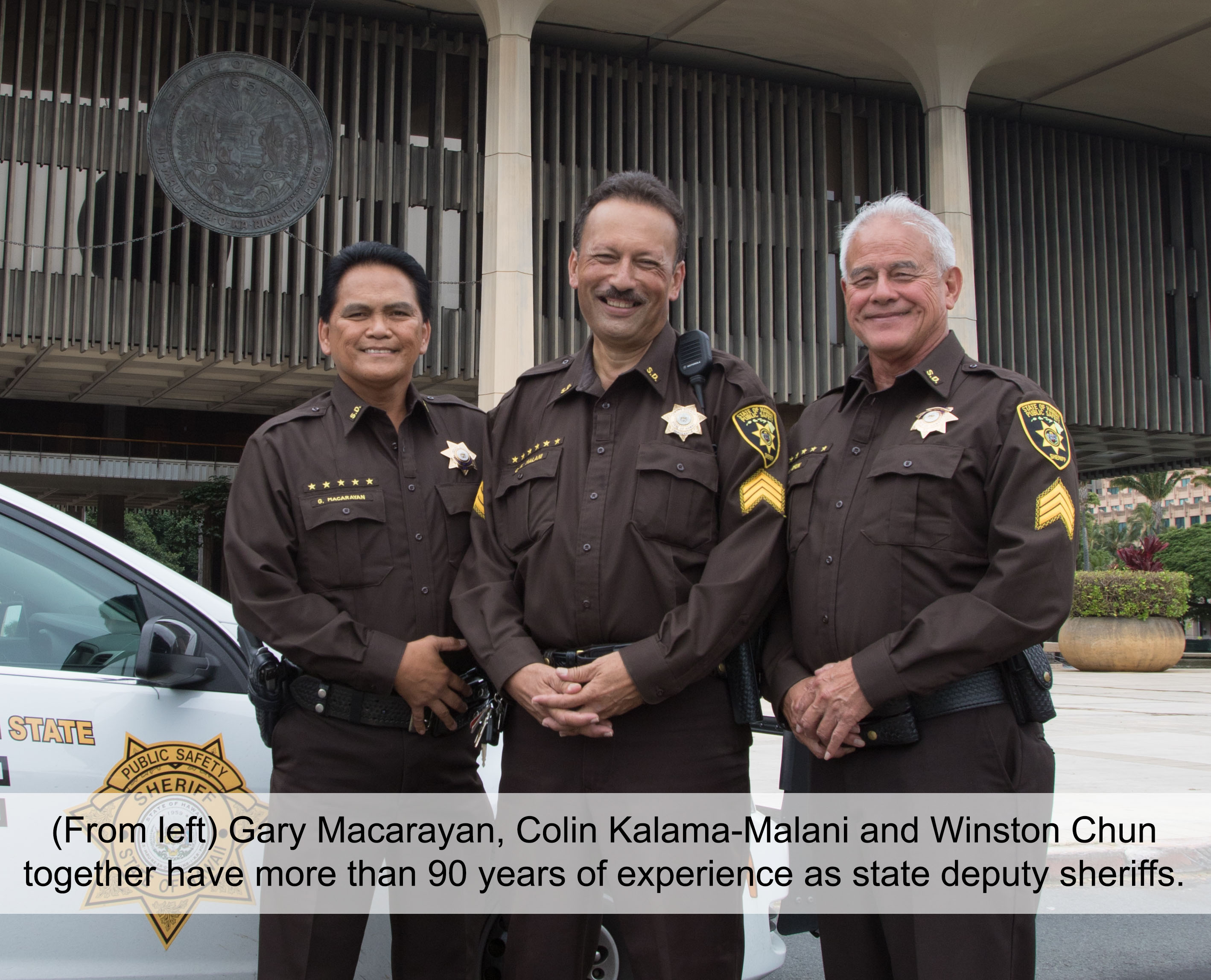 Collectively, Unit 14 members Colin Kalama-Malani, Gary Macarayan and Winston Chun have more than 90 years of diverse experience as deputy sheriffs in the State Department of Public Safety. Since starting their state law enforcement careers in the 1980s, they have seen the department undergo several transformations and have been part of the challenges and achievements of redeveloping an organization into the law enforcement presence that it is today. As they near retirement, they want to make sure before they leave public service that people know the unique history of Hawaii’s deputy sheriffs and recognize the vital work they do in keeping the community safe, and they want to ensure a foundation is set and a future secure for the next generation of state sheriffs. 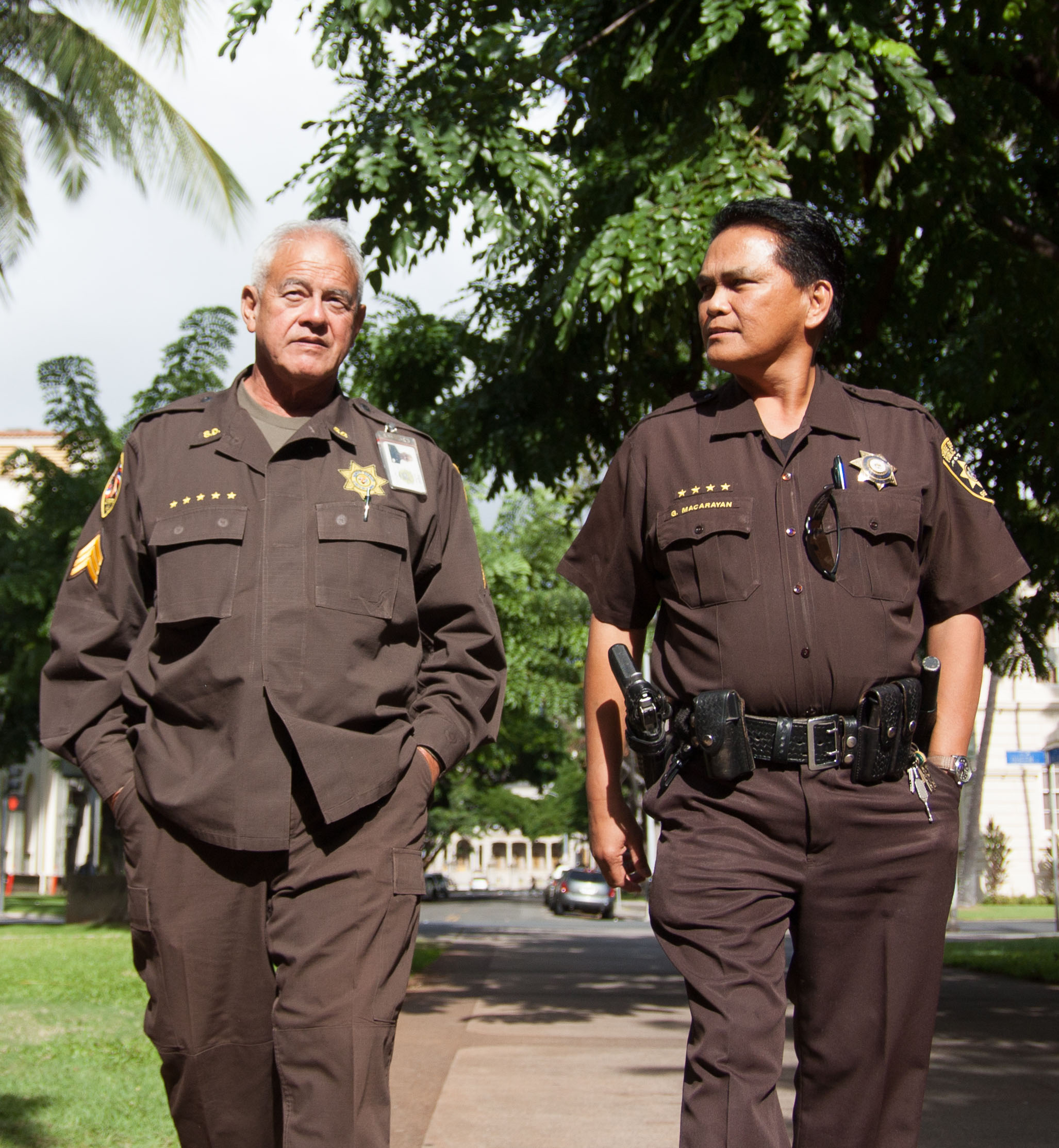 As the state’s oldest law enforcement agency and the only one in the United States created under a monarchy, the sheriff division has a rich heritage with functions that have evolved over the course of 170 years. A self-taught expert of Hawaiian history, Kalama-Malani himself comes from Hawaiian lineage that includes sheriffs in the 19th century, and he is active with the Hawaiian royal society, Daughters & Sons of Hawaiian Warriors — Māmakakaua. His brother and uncles were also sheriffs.

Yet despite a long history dating back to King Kamehameha III, there continues to be misconceptions about Hawaii’s more than 300 state sheriffs. “We’ve found that the public doesn’t really know what we do,” said Macarayan, who works at Ewa District Court. “We want people to understand that we’re here to provide meaningful service as state law enforcement officers. Men and women who are sheriffs are like any other law enforcement officer at the county or federal level.”

Recounting a recent incident where he stopped someone for speeding, the 29-year veteran sheriff shared, in disbelief, that the person told him he had no authority to pull him over. “People need to know we have police power,” Macarayan said. “It’s a matter of respect and pride. We’re here to service the community. More education needs to be done in order for the public to understand our role.”

Similar to county police, state sheriffs go through four to five months of law enforcement training, carry a firearm and take an oath of office. In Hawaii, the sheriffs have concurrent jurisdiction with the police — however, generally the sheriffs take care of law enforcement statewide and the police departments are responsible for the counties. Both essentially have the same authority, and the two organizations work closely together in protecting the public.

The sheriff division provides a wide range of law enforcement services. From executive protection for the governor, lieutenant governor and their families, and security for national and international dignitaries, to arrests, transport of juvenile and adult inmates, and serving the courts and processing and executing court documents, sheriffs’ duties run the full gamut. They also provide law enforcement presence at Honolulu International Airport, where Kalama-Malani is stationed with approximately 64 sheriffs in the Airport Patrol section.

A specialized canine unit, of which Chun supervises, operates under clear cut and well-defined missions. It employs a canine team that is used primarily as a sensory enhancement tool to locate missing or wanted persons, and detect illicit drugs, improvised explosive devices and undeclared cash attempting to be smuggled into the state. All dog teams operate under strict certification standards and operate well within law enforcement industry standards.

“We want to educate people and make them aware of the varied duties and responsibilities of our job,” Chun said.

As the world changes, people and organizations adapt. Heightened security after the Sept. 11, 2001 attacks in the U.S. changed the whole dynamics of the Department of Public Safety, particularly the sheriff division.

A sheriff for 35 years, Kalama-Malani was involved in a pivotal change in the department when the sheriffs took over patrol and enforcement of the airport and surrounding areas from the Honolulu Police Department in 1999. So when 9/11 happened, they already had sheriffs specifically trained for the airport. They were better equipped and had the knowledge to train more as the need and numbers for sheriffs rose. “I was happy because I was part of this change,” said Kalama-Malani. “We were certified on the federal training standards, and had acquired duties and responsibilities a little more than what we used at the courts. We quickly had to organize and train and be prepared to meet the challenges that came our way.”

The sheriffs at the airport are not only responsible for law enforcement functions and response at Honolulu International Airport, but also the surrounding business district, Kalaeloa and Dillingham Airfield. They are tasked with duties such as traffic control, citations and motor vehicle collisions as well as patrol work. They also have their own intoxication program (alcohol testing) and a K9 unit (separate from the one that Chun supervises) with deputy dogs that search U.S. mail twice a day, inspect luggage and occasionally work with TSA dogs. In addition, they have a new bike unit and are looking to expand their operations to other airports.

With the increase in court cases and facilities, and changes in their job functions, the need for sheriffs continues to rise. But the ongoing growth and development of their jobs only make their work interesting. “Throughout my career, I had opportunities to do things I otherwise would not have been able to do,” remarked Chun. “It’s never really dull. Because we’re a small group, we’re able to do so many different tasks.” Macarayan noted, “You could be looking for fugitives in their homes one day, preparing for a conference another day, then the next waiting for the president to come in.”

One shining moment for all of them was the 2001 Asian Development Bank conference in Honolulu where the sheriffs provided security and law enforcement presence. Through diligence and with limited resources, they were able to minimize cost and expenses. “We worked so hard. We stepped up and we got the job done,” Macaryan said proudly.

Working with limited resources is not uncommon for the sheriffs. For the often-remembered search for notorious Halawa Correctional Facility escapee Albert Batalona in 2003, sheriffs, especially those in K9 and warrants, along with other law enforcement officials, put in a lot of effort combing Hauula for days. When it was all over, the community threw an aloha luncheon for all of them. “It was so overwhelming, so heart touching. That gives you reason to stay,” Chun said. “When you get moments like that, you think, ‘it’s worth it,’” Macarayan added.

Looking to the future

Like any organization, the sheriff division has its challenges. With the advent of HGEA’s Bargaining Unit 14, which was established in 2013 to represent state law enforcement officers and state and county ocean and water safety officers (they previously were in Bargaining Units 3 and 4), the sheriffs are optimistic about the future. An arbitration decision is currently pending regarding the first-ever Unit 14 contract.

What they have been fighting for as state law enforcement officers is a fair and competitive compensation package compared to other law enforcement officers who have the same high level of skill and training. “We want to set it up where it’s worthwhile for the new deputies coming in, keep everybody together, make our division grow,” Chun said. “I’ve had a great career. The bond with the guys I’ve worked with and am committed to — it’s the one thing I can think of that’s been tying me here for 27 years.”

“What I enjoy most about my job is seeing the glimmer or flicker in the eyes of the new deputies who are considering this a new career challenge,” added Kalama-Malani, who helps with recruitment and on his own time spreads the word at school Career Days about the value and benefits of becoming a state sheriff.

Heading toward retirement, the three sheriffs want the public to know they are just like everyone else — your brother, your neighbor, your friend — and are proud of the work they do. “We’re also not happy that the UH football team is not doing too well,” Macarayan joked.

Kidding aside, Macarayan said what’s rewarding is the simple, unexpected “thank yous” he gets, recalling a time when someone he had detained saw him years later and told him he appreciated the discretion Macarayan showed during his arrest.

As they advance toward the next phase of their lives in several years, they’ll have a little more time for leisure activities — paddling and tinkering with cars for Kalama-Malani, golf, traveling, dancing and walking his German Shepherd dog Nakili for Macarayan, and golf, singing karaoke and spending time with his family for Chun. For now, they are enjoying their last few years on the job they cherish and have given their lives to.

“We love this community. We’ve all grown up here. We want to keep it safe,” Macarayan said. “It’s been a worthwhile experience. We’re all in this together.”