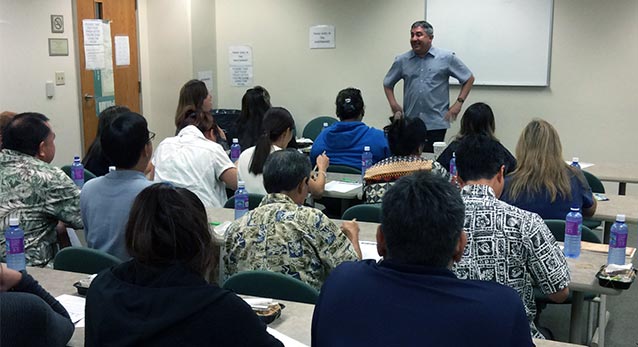 HGEA’s Executive Director, Randy Perreira, made a personal appearance at a Lunch + Learn for Kapolei members at the Kakuhihewa building last week, giving them an update on nationwide attacks against public-sector unions and how they will likely affect us here in Hawaii.

The main topic of discussion was a U.S. Supreme Court case titled Friedrichs vs California Teachers Association (CTA), scheduled to be heard next month or in January 2016. The lawsuit seeks to severely limit or eliminate our union’s ability to bargain and negotiate on your behalf.

First-time Lunch + Learn attendee Wendy Nihoa (MCEC) said, “I thought this was really good — I’m glad I came. I’m Excluded, but I choose to pay dues and be a member." Anticipating an unfavorable outcome to the pending case, she continued, "this session was short but insightful for me, and it's good to know there’s strategic movement to prepare for the worst.”

Executive Director Perreira reminded everyone that “this is just one in a series of cases attacking and undermining unions across the country. And unfortunately, we don’t have to look very far to see how devastating a lawsuit like this can be.”

In 2011 in Wisconsin, the birthplace of our parent union, AFSCME, Governor Scott Walker took away workers' rights to collective bargaining. Last year, the Wisconsin Supreme Court upheld the controversial collective bargaining law. Now, Wisconsin has become a right-to-work state (which really has nothing to do with your right to work), and the average public worker makes significantly less than when they had union representation.

In order to withstand these attacks, we need to stand together!

For more information on what’s at stake for Hawaii’s public sector union members, or how to schedule a Lunch + Learn for your office, email your union agent or call your local HGEA office.